Tom D’Eri is a strong advocate of the movement to empower individuals with autism to turn their natural talents into professional skills. Having seen the struggles that his brother Andrew, a vibrant individual with autism, faced in finding a job, Tom knew that there must be a way to help. He enthusiastically decided to work with his father, John D’Eri, to found Rising Tide Car Wash, a groundbreaking social enterprise and high-quality car wash experience.

In 2011, along with his father, he founded CanDo Business Ventures (www.candobiz.com), a company dedicated to designing, testing and deploying businesses that can provide sustainable employment for adults. Tom, who is the Managing Partner of the company, and his father, founded Rising Tide Car Wash to further this cause.

“I’m very passionate about empowering people through employment and I believe that when businesses are designed to intentionally help their people grow personally and professionally, everyone wins. This is especially true for employing individuals with autism – I’ve witnessed first hand through my work with Rising Tide Car Wash, that when our employees with autism grow and our management is dedicated to that growth, the customer experience is unparalleled in any service business. Our goal is to provide such great service to our communities that their perception of autism moves from a disability that requires sympathy to a valuable diversity that every business should look to harness.”

Tom was selected to speak at the United Nations’ World Autism Awareness Day event, “Employment: The Autism Advantage,” in April 2015 at the United Nations Headquarters in New York, New York.
Rising Tide’s NationSwell documentary, released in spring 2015, has been shared by notable figures on Facebook, The Huffington Post and more, and now has over 30 million views.
Tom attended Unreasonable Institute Global, one of the most prestigious social impact accelerator programs in the world, in summer 2014 (Rising Tide was chosen from over 240 applying companies worldwide as one of 13 carefully vetted ventures.)
On April 21, 2014, Tom and Rising Tide were featured on the national evening television news program, NBC Nightly News with Brian Williams. Emmy® award-winning international journalist Harry Smith visited Rising Tide to create the segment, which showcased how Rising Tide is empowering young adults with autism.
Tom was accepted into the Young Entrepreneurs Council in 2015, one of the most prestigious communities of entrepreneurs in the world.
On Aug. 29, 2013, Tom and Rising Tide were featured in Forbes, in the article “What The Rising Tide Car Wash Really Does.”
Tom and Rising Tide have also been featured in Fast Company, the Miami Herald, and on Fox Business’ “Making Money,” MSNBC’s “Your Business This Sunday,” and TEDxCoconutGrove.
In February 2014, Tom, along with his father, was invited to speak at the February 2014 TEDx Coconut Grove, an entity of the national TED program of local, self-organized events that engage the community in a discussion of ideas to expand perspectives and make a philanthropic impact.
Tom and his father were selected by Autism Speaks to share their knowledge at the first-of-its-kind national Extraordinary Ventures Conference in January 2014.
In summer 2013, Tom and his father attended the SOCAP13 (Social Capital Markets Conference) in San Francisco, Calif., for which Rising Tide was awarded a scholarship.

Tom currently serves on the board of the RACI Project, a volunteer-run citizen organization specializing in cross-cultural solutions for sustainable livelihoods development; and is a StartingBloc Fellow among other young leaders aged 18-30 from all sectors who believe that economic value creation and social value creation are complementary. While in college, he performed extensive service with the Nassau Suffolk Services for Autism.

Tom is integral to the scaling phase of Rising Tide. Rising Tide is currently in the process of building its second location in Margate, Florida; which will be 50 percent larger than its original location and is slated to employ at least 45 individuals with autism. By scaling the business, Tom has the goal to provide a means for other families to bring this solution to their communities nationwide.
Tom is dedicated to empowering other families affected by autism to build businesses, like Rising Tide, in their communities. To do this, Tom and his team are launching Rising Tide University to share Rising Tide Car Wash’s knowledge through training and coaching. 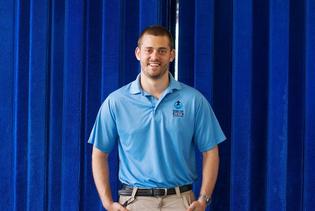